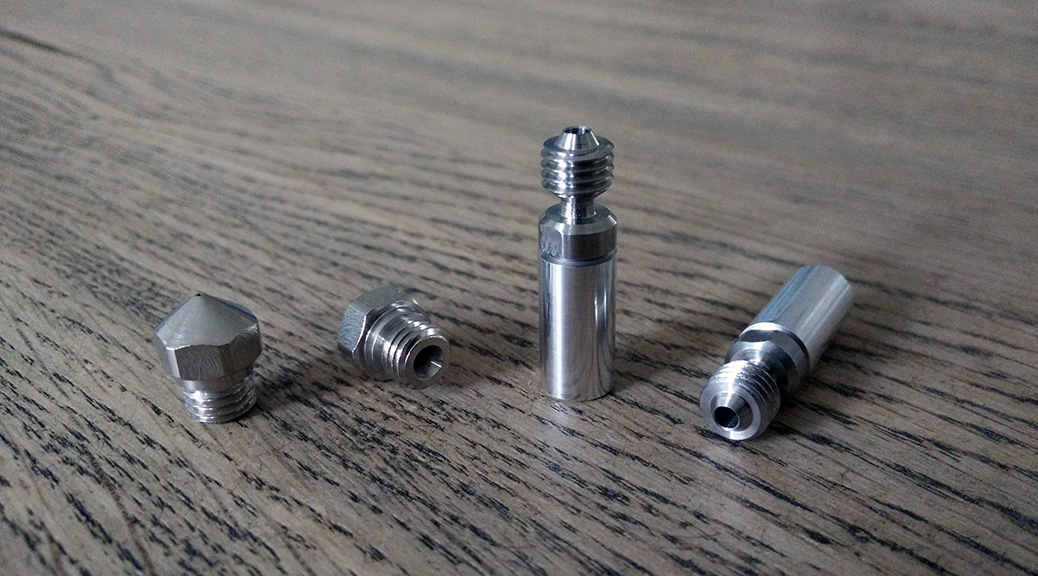 As delivered from the factory, the Flashforge Dreamer can print plastics like PLA and ABS, but more demanding plastics like Nylon and polycarbonate are out of reach due to temperature limitations of the hotends. This article covers the upgrade to metal hotends and a trial run with the new nozzles using PC plus polycarbonate filament. If you prefer watching video tutorials over reading blog articles, most of the information is also covered in the youtube video below:

The Flashforge Dreamer 3D printer is equipped with equipped with brass mk10 hotends. These standard hotends use a PTFE (teflon) tube which runs all the way down into the nozzle. The PTFE tube acts as a heat brake and prevents the filament from melting before it reaches the hotend. However, when using the hotend at higher temperatures, the teflon tube starts to turn dark and the diameter shrinks, trapping the filament inside. The only option is then to replace the teflon tube and try again at a lower temperature.

In my search to find a compatible metal hotend I came across the company Micro Swiss LLC. This company offers a number of different metal hotends, one of them being a mk10 type, which should be compatible with the Flashforge Dreamer and other machines using  a nozzle based on the same design:

The hotends are reasonably priced and shipping to countries outside the US is only $4,95. (padded envelope).

On their website there is an excellent tutorial for installing the hotend on a flashforge Creator Pro. Then why this article? Well, to provide an independent (re)view on installing the Micro Swiss hotend and to cover items specific to the FF Dreamer. Also, I will test the hotend with a recently released polycarbonate filament, PC-plus, by Polymaker.

Installation of all metal hotends

In order to remove the old hotends, pre-heat the nozzles to operating temperature of around 220C. Unscrew the nozzles using an adjustable wrench and a 9mm wrench. Be careful not to damage the insulation around the heating blocks. Turn off the pre-heat function when the nozzles are removed. 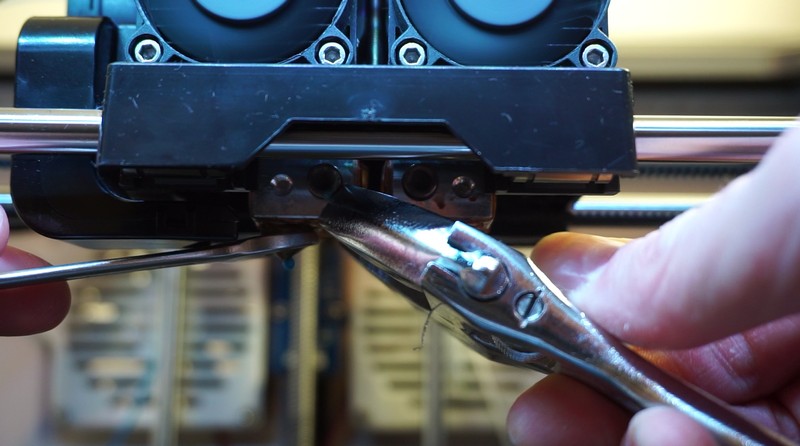 Remove the PTFE tubes with a small pair of pliers. Depending on how long the tubes have been in place it might require a bit of force to pull them out.

Remove the top cover on the extruder assembly. Mark the wires for the heating cartridges and thermocouples. Even ink of permanent markers does not adhere very well to the cables of the heating cartridges. I found this out the hard way. So it is probably better to mark these wires with (painters)tape.

Unscrew all wires from the terminals and disconnect the extruder fans and stepper motors. The print board can be taken out by removing 2 screws.

Unscrew the two long screws to remove the bottom of the enclosure.

Remove the extruder fans and stepper motors by unscrewing the horizontally placed screws at the front of the assembly.

Due to a minor design flaw in the extruder bar it might be hard to remove the thermal tubes. If the set screws were tightened very hard, they will have damaged the surface of the thermal tube. Due to the tight fit with the hole in the cooling bar this can cause the tube to get jammed inside the hole when attempting to remove it. In my case this happened with only one of the thermal tubes. The problem is easily solved by tapping the thermal tube out using a hammer and a punch. When this procedure is performed carefully it should not create additional damage to any of the parts. 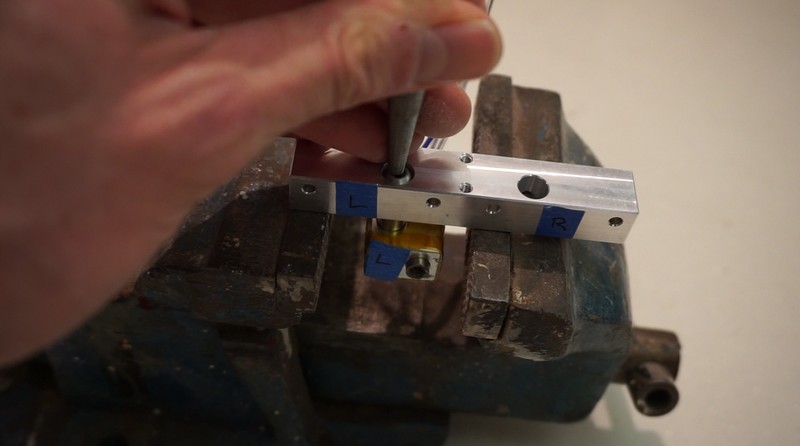 In order to prevent this issue from reoccurring in future assembly operations the manual recommends to use a round file to remove some material at the area where any burrs on the thermal tube might get stuck. This is optional, but only takes around one minute to perform.

Mounting the nozzles is done by hand, as you need to be able to adjust them later on in the process. Per the instructions I bottomed out the nozzle and rotated it back 1/2 turn. The new thermal tube can then be screwed in, again using only finger pressure. If the preparation of the holes in the cooling bar was done correctly, the thermal tubes should slide in without friction, which they did. After the check I applied the thermal compound supplied with the kit and mounted the nozzle assembly back into the cooling bar.

With a dual nozzle printer like the Dreamer it is critical to align the nozzles relative to each other. If the alignment is not performed accurately enough, the lower nozzle can knock objects off the platform that were printed with the other nozzle, or can negatively impact print quality in parts printed in dual extrusion mode.

The instructions advise to use the build plate of the printer to align the nozzles. This is the easiest option, but you need to make sure that the platform was aligned properly before starting the procedure. If the platform is tilted, the error will be transferred as a height difference between the nozzles. The best option is to perform the alignment outside the printer, but this requires 2 equal standoffs of the correct height. Since I did not have these available I followed the procedure and used the bed for alignment. This is done by first pushing the bed against the lower nozzle and then lowering the other nozzle onto the bed.

Reassembly of the extruders is performed in the reverse order. Fixing the wires again in the correct wire terminal is quite fiddlly. A pair of small pliers is indispensable for this job.

The final step is to heat the extruders to operating temperature and tighten the nozzles.

After the installation I ran the bed leveling procedure to verify the distance of the nozzles to the bed. The bed had to be lowered significantly for the new nozzles (my estimate would be around 1mm). The height difference was small enough that the alignment screws could be used for the adjustment. The height difference between both nozzles and the bed was measured using a feeler gauge and showed that the nozzle alignment procedure was actually quite accurate. No further adjustments were necessary.

After the installation I performed a test print with PLA to make sure everything was still working before attempting more challenging materials. Loading the filament was performed without any issues. The stepper motors seemed to have no problem pushing the filament through the new all metal nozzle. This would support the claim by Micro Swiss that the heat transfer to the filament is better than the standard hotend. At this moment I am not sure if it is better, but at least it is sufficient to cope with the high flow rates used during the filament load cycle, which are much higher than used in the printing process. Even when loading filament for more than 10 seconds I did not hear the stepper motor skip any steps.

The test part printed without any issues. Although I did not print enough parts to compare the print quality with the old hotend my first impression is that the quality is at least as good.

Now for the real challenge; printing with polycarbonate. This is something that is not possible on a standard Flashforge Dreamer, nor is it on the vast majority of 3D printers for home use.

Polymaker released a polycarbonate filament in 2015, called PC-plus. This filament requires an extrusion temperature between  250 and 270 degrees Celsius. The recommended heated bed temperature is 80 degrees C. It comes supplied with a Buildtak printing surface, since this is apparently the only surface that this material sticks to.

Since my printer already had a (well used) Buildtak sheet attached to the print bed, I decide to use this first in case the build surface got damaged. For the first test print I opted for the well known Benchy part. It has some challenging features, which would show the capability and possible issues of the new setup when printing PC-plus filament.

Print settings used or this part:

The print quality for the part was, by my standards, quite acceptable. It did not reach the finish quality of a PLA printed part, but for a first test I was still impressed with the results.

Removing the part from the bed required a significant amount of effort, but I was able to remove it without damage to the part or the Buildtak sheet. The Polymaker quide recommends setting the nozzle height to 0.3mm from the print bed. During this test the nozzle height was set to 0.2mm, which could explain the part sticking too well. Also the guide recommends a distance between the raft and the part of 0.3mm, which in my case was also 0.2mm. This caused the raft to be also very hard to remove. After removing as much as possible by hand, the rest was removed by sanding. When using increasingly fine grit sand paper a nice surface finish can be achieved. This also proved the claim of polymaker that the material was very suitable for post processing by means of sanding.

Since this was my first experience with printing polycarbonate, I will probably have to perform a lot more experiments to uncover the possibilities of printing with this material and to find the optimum settings for the Flashforge dreamer in combination with the Micro Swiss hotend.

If you have any questions about this upgrade let me know in the comments.

And of course; should you attempt to perform a similar upgrade, it is completely at your own risk.