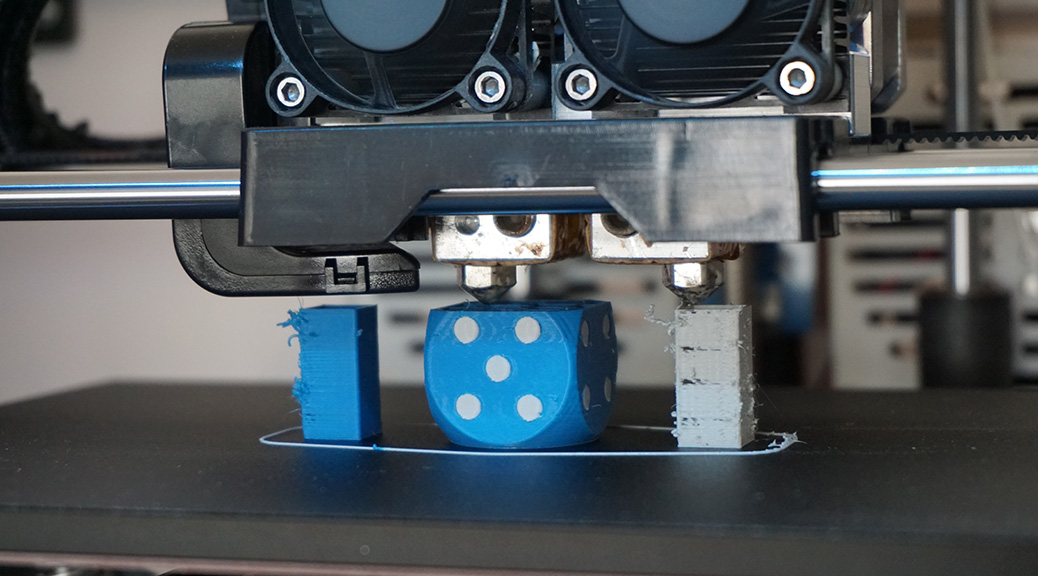 As anyone who owns a 3D printer knows, it may take some of trial and error to obtain good print results. This is especially the case for dual material prints. The Flashforge Dreamer supports dual material printing out of the box. However, I have noticed it can be hard to print parts without color mixing due to oozing extruders that wipe themselves clean on the edges of the part. In this article I will describe a method to use dual extrusion with Slic3r, which significantly improves print quality.

Flashprint offers an ooze shield (Wall) function to prevent transferring blobs of material from the nozzle onto the edges of the part, but it does not completely eliminate the issue. An example of the wall feature is shown in the illustration below:

The part used in this article was downloaded from thingiverse:
http://www.thingiverse.com/thing:21842/#files

This part is used as an example, since the multiple small dots ar quite challenging to print correctly without color mixing.

After several tries and browsing forums I found a solution in Slic3r that works significantly better than the standard approach offered by Flashprint.

Update 22-05-2017: In Flashprint 3.17.0 a more advanced wall mode was introduced, better following the contour of the part. This might be a viable alternative if you prefer using flashprint. If you would like to experiment with Slic3r, please read on!

If you have not yet configured Slic3r for the Flashforge Dreamer, the following article might be useful, in which I describe the G-code settings and post processing script I use to operate the Dreamer from Slic3r in dual extrusion mode:

Slic3r G-code for dual extrusion printing on the Flashforge Dreamer

When the initial setup is completed, the part can be prepared for printing. Load both STL files into Slic3r, in this case the body of the dice and the dot pattern.

You can create your own prime pillar or download it here:

Scale each pillar to match the height of the part. The pillars are 10 mm high. The part itself is 25 mm high, so the pillars should be scaled 250% in Z direction only. To do this right click each pillar and select “Scale->Along Z axis…”

The distance of the pillars to the part is also critical;

Place them at a distance larger than the distance between the 2 nozzles to avoid the left extruder oozing onto the edge of the part when the right exrtuder is printing the pillar and vice versa. In this example the distance is actually smaller, but since the unuzed nozzle is in the center of the part when one of the pillars is printed, this does not have an adverse effect.

In te example below however, the distance was insufficient (<34 mm) and the filament oozing from the right extruder was deposited onto the edge of the model.

Unfortunately, using prime pillars alone is not sufficient to prevent ozzing filament from being draged onto the part in some cases. There is a setting in Slic3r which is very useful in preventing this issue. It lowers the bed between each retraction (therefore also at each tool change), so any blob hanging from the extruder does not come into contact with the outside of the part.

Enter a positive value in the “Lift Z” field under the Printer Settings tab. I found that for the filament I typically use 2 mm is sufficient, but the required distance may vary depending on filament, print temperature, etc. Set the same setting for each extruder.

Slic3r offers a function in which it avoids  crossing perimeters with an extruder if possible. In this example it helps specifically with the top layer. With this setting enabled, the extruder printing the body will not drag across the white dots of the dice and vice versa.

In the picture below the final result is shown. Although not perfect, all the sides of the model are free from unwanted color mixing.