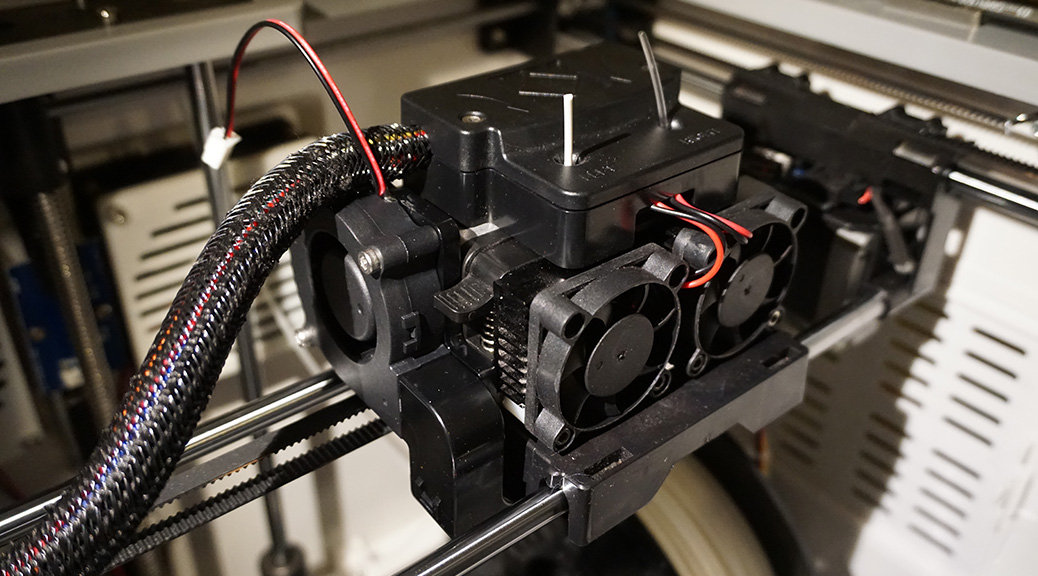 In this post the installation of a PLA Turbo fan on the Flashforge Dreamer is described, including the benefits for printing with PLA.

As discussed in the Flashforge Dreamer review posted earlier, some of the Dreamer models did not come with a nozzle fan fitted on the side of te extruder carriage. My specific printer was only equipped with 2 larger fans mounted on the back of the printer.

PLA should be cooled as quickly as possible after leaving the nozzle in order to obtain the best results, especially in challenging situations, such as steep overhangs. The large fans mounted at the backside of the printer provide a steady air flow across the entire build platform. However, when printing PLA, the air flow should be more concentrated around the nozzle in order to be effective.

Flashforge fitted later models with the aptly named “Turbo Fan”, directed primarily at the left nozzle. I decided to try this option first before attempting to design my own fan/duct system.

In the Netherlands it is not possible to order directly from Flashforge. When ordering from the US website, costs for shipping and customs are close to 100 euro.

On Aliexpress the original (?) Flashforge parts can be obtained for a very reasonable price and shipping is free when opting for China Post Registered Air Mail.

The turbo fan costs €17,40 at the time of writing and the fan duct can be purchased for €11,65. Check the links below for details and current pricing.

The delivery times with the China Air shipping method can range from anywhere between 2 weeks and 2 months. In this case I received my parts within 3 weeks.

The bolts have an M3 thread. The holes were pre-drilled using a 2,5mm drill bit. The depth of the drilled holes should be around 5mm deeper than the depth the actual bolt reaches, in order to compensate for the fact the the first couple of threads will have an incomplete diameter. This is due to the shape of the tap which is tapered at the tip.

A three stage tap set was used to thread the holes. Each tap (taper tap, second tap and finally the bottoming tap) will form the shape of the thread to create the final M3 thread. Since the M3 threads are small and the aluminum is a relatively soft material, care has to be taken not to damage the threads by excerting too much force.

After tapping the holes, the mounting bracket can be attached, followed by the turbo fan and fan duct.

The cable should be attached to the “Fan” connector on the driver board. This allows control of the fan through the flashprint software.

The picture below shows two Makezine test parts for evaluating overhang performance. The used material is Formfutura Easyfil PLA. Print settings: extrusion temperature 190C, bed temperature 50C and speed 60 mm/sec. The top part was printed using only the back fans. The bottom part was printed with both the back fans and the nozzle turbo fan on. A dramatic improvement was obtained with these settings. The print quality is better across the entire part, but is most visible in the last section, which has an overhang of 70 degrees.

The stock Turbo Nozzle fan enables the Flashforge Dreamer to deliver very good results when printing with PLA. The upgrade is definitely worth the effort.