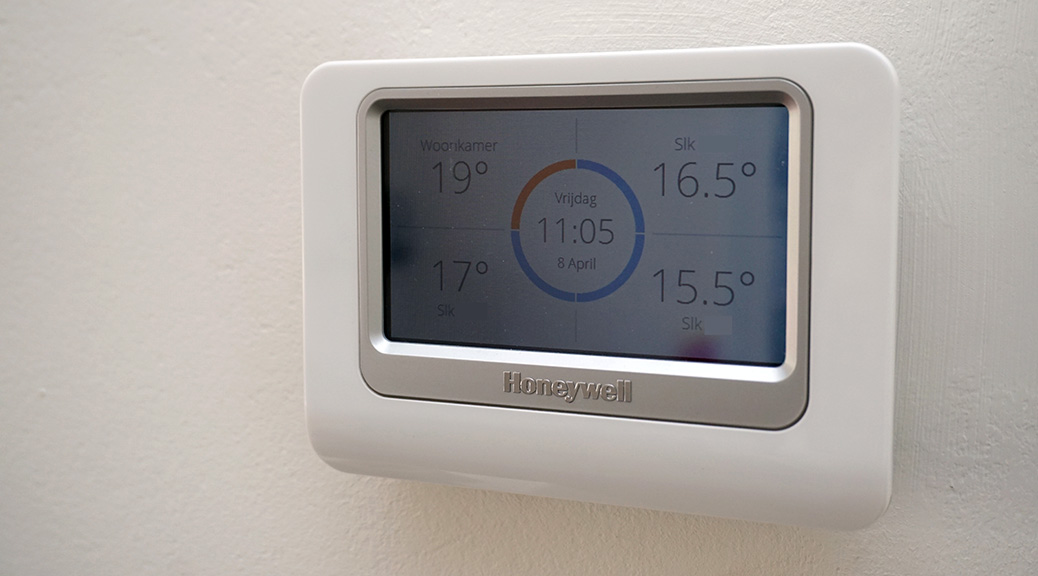 There are many smart thermostats on the market, but the Honeywell Evohome system stands out in its ability to control the temperature in multiple zones independently. This is what makes the system a lot smarter than other thermostats. Of course there is also an app to control temperature of each zone remotely.

In this review I will discuss my experiences with the Evohome system since I installed it at the end of 2014.

The system under review in this article is the 2nd generation, but since not much has changed besides the integration of wifi in the controller, most of the contents should also apply to the current generation.

First I will cover the installation process and at the end of the article I will discuss my experiences with the system in daily use.

For homes with an existing central heating system, including radiators fitted with thermostat valves, the Evohome system can be installed without the need to drain the system. It works with most existing radiator valves. It may seem a bit daunting perform the installation yourself, but when following the provided instruction manuals the process is not that hard. It consists of the following main steps:

There are a couple of additional steps I had to perform to let the system function correctly in my situation:

Power up the Controller other system components.

The main controller comes supplied with a table stand with built in AC adapter. The benefit of using the table stand is that there are no holes to drill in the wall. It is just plug and play. Make sure you place the unit away from radiators and door openings where drafts may affect the temperature reading.

In that case the AC adapter can be placed near the boiler and connected to the controller using a low voltage supply cable. I placed the AC adapter in standard electrical box next to the boiler, as shown below with the lid removed.

The controller also has 2 chargeable AA batteries, which serve as power supply when you take the unit off the wall for programming or other purposes. They can be replaced if necessary by removing the front cover.

The HR92 radiator controllers are powered by 2 AA batteries, which are supplied in the kit. Also the internet gateway and Opentherm module should be powered up before starting the installation procedure.

Installing components and binding them to the Evohome controller

The components in the Evohome system communicate to each other using an 868Mhz signal. They each have to be registered on the main controller in order for the system to work. Typically this involves pressing a button on the device and setting the main controller in reception mode. Details are covered in the instruction manuals, so therefore I will not go through them in detail here.

All available HR92 radiator controllers should be connected to the main controller. This can be done using a wizard, which guides you through the process of creating a new zone and binding the valve. It is also possible to manually add, delete or change an existing zone.

The HR92 unit has an internal temperature probe which can be used to measure the temperature of the room it is installed in. However, when the HR92 controller is mounted under a windowsill or behind a curtain it is better to install an external temperature probe. A round wireless thermostat can be used for this purpose. It can be configured through a simple procedure to act as a probe in the Evohome system instead of functioning as a stand alone thermostat. Initially I used the HR92 as temperature probe for all rooms except the living room, but found some bedrooms showed high fluctuations in temperature. For these rooms I later fitted round wireless thermostats and included them into their specific zone.

The internet gateway should be connected to the local area network using an RJ45 connector. When this is done the wireless connection to the main controller can be established. The gateway does not have to be near the main controller to function properly. Since the communication between the gateway and the controller is also performed using the 868Mhz signal, it has a large wireless range. I installed the gateway on the third floor, with a concrete floor and 2 walls seperating both components and still the reception is fine. This means you should be able to place it anywhere in your home where you have a wired LAN connection available.

The boiler powering my heating system is a Nefit HRC 30/CW5. It is a modulating boiler, but unfortunately this boiler does not have native support for the Opentherm protocol. Nefit does offer an Opentherm converter module, the EMS-OT.

This module can be connected to the modulating input terminal. This is the orange terminal in the picture below.

The other end of the module is connected to the Evohome Opentherm module. The Opentherm converter does have it limitations with regards to the supported error messages (for example I do not get a message from the Evohome when the boiler pressure is low) but otherwise it functions perfectly straight out of the box. Actually, since there are no settings possible on the converter it either works or it doesn’t, so I was lucky it fell in the first category.

When the Opentherm module is powered up and connected to the boiler it can be connected wirelessly to the main controller using the binding procedure.

Replace existing radiator valves with the the HR92 units

However, in my house some of the radiators were fitted with the older Danfoss RAVL type valves. Although it may not be advertised specifically for use with the HR92, there is an adapter set available from Honeywell that contains several adapter rings, including one that converts an RAVL valve to M30x1.5. It is the black ring on the right in the picture below:

The installation of an HR92 controller on a Danfoss RAVL valve is shown below:

The installation of radiator valves with the nowadays more common M30x1.5 connection is performed as follows:

In case you may wonder how large the HR92 valve controllers are when compared to the conventional vlaves they replace, I placed them side by side for a size comparison:

The HR92 is significantly bigger than the old RAVL danfoss type, but when compared to a new Heimeier M30x1.5 the difference is only about 1 cm in length. In practice the size difference does not really matter since you quickly forget about the valves controllers after they are installed. And of course it all depends on personal taste, but I think they look quite nice for a radiator valve controller.

There is one more thing that should be considered when installing the Evohome system. Even when none of the zones are requesting heat from the boiler and therefore all valves are closed by the HR92 units, the pump may still be activated from time to time. From experience I can say this leads to a very unpleasant loud humming noise, which sounds very unhealthy for the pump. There are 2 ways to deal with this. You can either leave a manual radiator valve always open (which does not make s nse in most cases), or an over-pressure bypass can be installed between the outgoing and incoming water line in the heating system. I chose the latter option. The bypass was installed by a plummer, who mentioned that it should be installed around 6 meters from the boiler if possible. In my case it could not be fitted at that distance, so it is now located at only roughly 2 meters from the boiler, but it still functions correctly.

A Comap 872B differential presssure valve was used for the bypass. It can be adjusted to open at pressure differences anywhere between 0.1 and 0.5 bar, based in the system in which it is fitted. I used some trial and error to find the setting for my system at which it opened at the desired moment. If the valve opens too early it will cause the boiler to stop heating triggered by high temperature of returning water (which did not flow through a radiator but was directly fed back through the bypass).

The system has been in use for roughly 1 year and 4 months at the time of writing. In this period I have not experienced any major issues. A couple of weeks ago the batteries of the HR92 in the living room needed to be replaced. All other units are still running on the original batteries supplied with the kit.

When installing the system I was afraid of insufficient range of the HR92 units or lost connections, but this has not happened, not even to the HR92 units which are furthest away from the main controller. (installed on the 3rd floor and 1st floor respectively)

I am not very enthusiastic about the android app. Although it has all the functionality that I need, it simply takes too many clicks and swipes to change the temperature of a zone.

Despite some minor downsides I am very satisfied with the Evohome system. I functions flawlessly at it’s core task, which is to control temperature independently in multiple zones. The main controller is also very user friendly. I would not want to return to a single zone heating system.