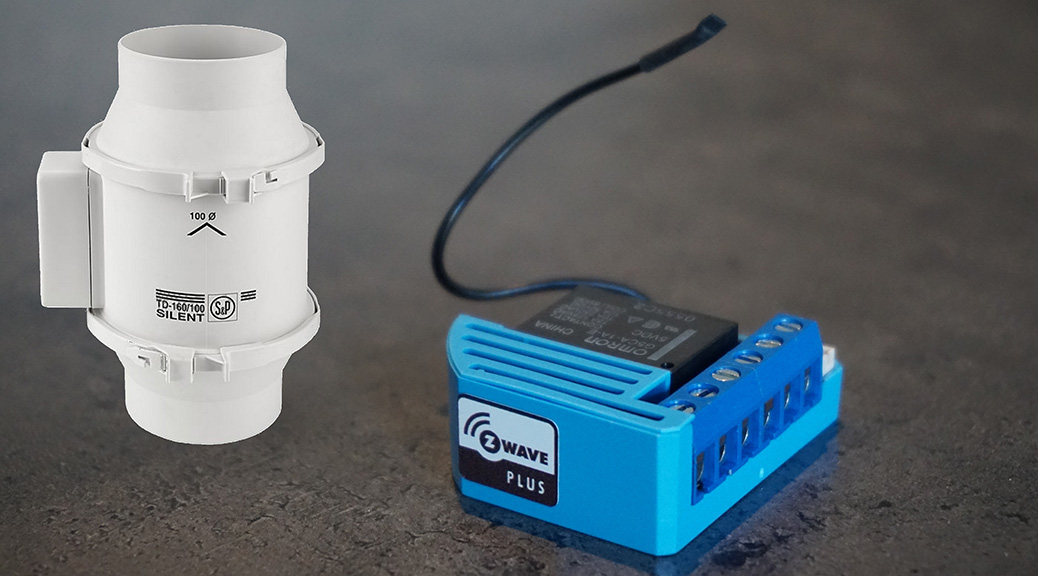 This is a short guide on how to install an inline duct fan and a z-wave enabled switch to control the fan.

Any bathroom benefits from proper ventilation, which helps to prevent mold and excessive humidity levels. For my bathroom I decided to use an inline fan, which is typically less noisy than a ceiling mounted version. Trading in a humid environment for a noisy one did not seem like a good plan.

Since I did not have a possibility to connect a wall switch directly to the fan, I decided to use a Z-wave enabled switch by Qubino. This allows for control by means of an app, wireless wall switch, sensor or scene from the main z-wave controller.

The fan and Qubino were connected according to the diagram below:

The Qubino is connected to both the neutral (blue) and live (brown) wires. The load, in this case the fan is then to be connected between the Q connection on the Qubino and the neutral line. However, the S&P fan has 2 live wire connections, for the low and high RPM setting. I installed a double 2-way changeover switch, so the fan can be switched between low and high RPM at any time. The switch is located near the fan in a closet, since it is not intended for daily use. The left switch in the diagram acts as a master on/off switch, which allows the fan to be disconnected from mains power and stay off, regardless of the Qubino switch state. Both wall switches are optional, but provide some additional control over the fan after installation.

The picture gallery below shows some details of the installation.

Note that the fan is connected to the fixed pipes with flexible plastic hoses. This is to even further reduce noise levels, since it prevents vibrations from the fan from being carried through the entire length of the pipe.

The Qubino module was placed directly behind the wall switch. It is highly recommended to use an electrical box that is at least 50 mm deep, otherwise you are in for a real struggle. In theory a 40 mm deep box would suffice, but in practice it would be very hard to fit the module, switch and wiring inside the box.

Parameter settings for the Qubino module

Using the Vera UI, I set a couple of parameters in the Qubino module to let the fan behave as desired. Variable 11 is set to 600 seconds. This lets the fan run for 10 minutes, after which the Qubino module automatically turns the relay back to the off position. Each time the module is set to on, by a switch, scene or otherwise, the timer resets to 10 minutes.

The other variable I changed was parameter 40. This sets the minimum change in power in percentage that triggers the Qubino to send a power consumption update to the main z-wave controller. The default is 10 percent, but due to variations in power consumption, this caused the module to send an update every couple of seconds. This leads to unnecessary traffic in the z-wave network. When I increased parameter 40 to 20 percent, the power level was only transmitted when the relay was turned on or off.

Currently I have the fan activated by a scene in the main z-wave controller (Vera Edge), but plan to make it a bit more intelligent later on by adding a multisensor. This can be used to trigger the fan based on humidity, light, movement or any combination of these factors.

If you are planning to attempt a similar installation, I am not responsible for any damage or injuries following following from the use of information in this article.